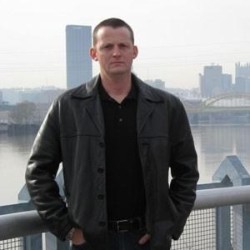 Follow Me
J.J. Hensley
J.J. HENSLEY is the award winning author of two novels that feature distance running protagonists – Measure Twice and RESOLVE.Hensley is former police officer and Special Agent with the U.S. Secret Service who has drawn upon his experiences in law enforcement to write stories full of suspense.The author is currently a training supervisor with the U.S. Office of Personnel Management and lives with his beautiful wife, daughter, and two dogs near Pittsburgh, PA.

Follow Me
Latest posts by J.J. Hensley (see all)

I grew up watching my father run.  As far back as I can remember, my dad would set out to run four or five miles a few times per week and would return draped by a sweat-drenched, decades old Marshall University shirt that should have been retired when we landed on the moon.  He didn’t run much a youth, but a stint in the Marine Corps changed that and for most of his life he pounded the pavement whether it was 90 degrees and humid or 20 degrees and windy.

Nobody forced him to do it and nobody pressured him to compete.  In fact, to my knowledge he never ran a competitive race until I asked him to help out on a marathon relay team a couple of years ago.  He was totally unfamiliar with the organization and atmosphere of organized distance running, and this was highlighted by the conversation he had with me that followed after we had both finished our legs of the race.

Dad:  Hey, toward the end of the race I noticed this truck with lights picking up people who were walking or stopped.  What was that all about?

Me:  It’s called a sweep vehicle.  If a runner or walker isn’t maintaining a certain pace or gets injured, the truck picks them up and takes them to the finish.

Dad:  Oh, we had something like that in the Marines.  Of course there it was actually a stocky drill sergeant who kicked us in the ribs with hard boots and said, “Get the f&*% up!”.

My father never accumulated race bibs, medals, or 5K T-shirts, but I know that my seeing him go out there day after day, regardless of the weather, had a strong impact on me.  So, now I find myself the father of a three-year-old girl and I wonder what lasting memories she will have.

My wife and I have numerous race medals lying around and it seems most of our T-shirts come from one race or another.  We’ve taken our daughter to “Toddler Races” and made sure to point out that sports are fun, while making sure to not overemphasize the competitive aspect.  We’ve taken her out in the running stroller, which I have mixed feelings about (read more here).

But, what will she really remember?  Will it be the trinkets from the race bags or the Turkey Trot shirts?

No.  I think she will probably remember her dad walking in the door wearing a sweat-drenched, decades old, Penn State shirt that should have been retired when Seinfeld went off the air.  And someday she’ll take me to some sort of athletic event she is participating in and I’ll see something with which I’m unfamiliar.  She’ll explain things to me and I’ll take my time searching my memory before saying something like, “Oh, we had something like that in Secret Service training.  Of course there it was…”

Perhaps the best way to encourage our kids involved in an active lifestyle is not to worry so much about making a big deal about specific events like races, but rather focus on the day to day behavior we exhibit.  Of course, there isn’t anything wrong with occasionally making a big production out of running a 5K or finishing a marathon.  We all do from time to time and rightly so.  However, those are fleeting moments that may not resonate with young minds.  The moments we have in-between those events number far more than the events themselves.  For parents, every day is another chance to encourage our children to be active and our kids can see that we do so without any promise of a T-shirt or a medal.

But, the occasionally bling sure is nice.